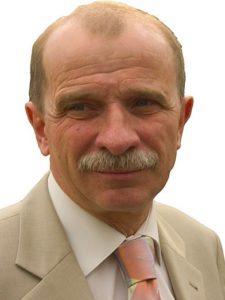 A well-known scientist in the field of thermophysics and heat power engineering Corresponding Member of NAS of Ukraine Boris Ivanovich Basok was born on May 12, 1956. In 1978 he graduated from the Physics Department of the Kyiv State University (now – Kyiv National Taras Shevchenko University), and in 1982 – postgraduate study at the said university. From 1982 to the present time he works at the Institute of Engineering Thermophysics of the National Academy of Sciences of Ukraine, consistently occupying positions from senior engineer to deputy director for innovation activity (since 1993) and deputy director for scientific work (since 1996 to 2016) and head of the Department of thermophysical basics of energy-saving technologies (since 2003). In 1993 he graduated from the International Management Institute “IMI-Kiev” and the Management Academy in Celle, Germany. Candidate of Physical and Mathematical Sciences (1985), Doctor of Technical Sciences (1998), Corresponding Member of NAS of Ukraine (2006). Master of Business Administration MBI (1993). Laureate of the State Prize of Ukraine in the field of science and technology (1997). Laureate of the Prize of the National Academy of Sciences of Ukraine named after Tolubinsky (2009).

The main directions of scientific activity of B.I. Basok are fundamental research in the field of thermal physics and heat transfer. B.I. Basok is a leading scientist in the field of nonstationary heat and mass transfer processes and hydrodynamics in heterogeneous dispersive environment. He carried out fundamental studies of discrete-pulse input and energy transformation in disperse fluid systems and worked out the thermophysical foundations for implementing energy saving processes for heat technologies of various industries. In particular, this study of general problems of heat and power engineering, including studies of cogeneration processes for the production of thermal and electric energy, processes of ground accumulation and heat recovery, use of renewable energy resources, and studies of environmental climate change. Recent achievements relate to solving general problems of heat and power systems and complexes, including the tasks of increasing the energy efficiency of buildings and the actual tasks of building thermal physics, including creation of passive, “smart” buildings of the “0-energy” type and autonomous heat pump low-temperature systems, their climate control based on renewable energy sources. Basok B.I.  is the author and co-author of more than 500 scientific works, of which 16 are monographs, more than 280 scientific articles and more than 40 author’s certificates and patents. He prepared 10 candidates and 3 doctors of science, actively participates in the preparation of masters in the Institute of Energy Saving and Energy Management of NTUU “KPI”. Basok B.I. are: Member of the Board of the State Fund for Fundamental Research of Ukraine; Deputy Chairman of the Technical Committee on Energy Efficiency of the Ministry of Regional Development of Ukraine; Chairman of the Committee on Energy Efficiency of the Chamber of Commerce and Industry of Ukraine; Vice-president of the National Association of Ukraine for Heat Pumps; Vice-president of the Technological Energy Park “Institute of Engineering Thermophysics”