Institute of Engineering Thermophysics of NAS of Ukraine.

Institute of Heat and Power Engineering was carrying out the research on the improvement of heat engines, the intensification of heat transfer processes in different technical devices and the research on the energy-technological using Ukrainian’s brown coal.

Then the Institute began working in new scientific directions such as: high-rate heat and mass transfer, mining thermophysics, measurement of heat processes, thermoprotection of high-temperature devices.

Now the main directions of the Institute’s scientific and technical activities are: 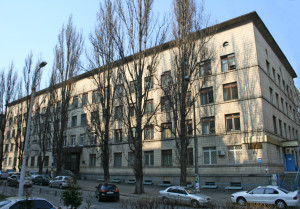 Since December 2015, the Institute is headed by Yu.F. Snezhkin, Corresponding Member of the NAS of Ukraine, Doctor of Engineering, Professor. Academicians the Academy of Sciences of Ukrainian O.N. Shcherban, O.O. Kremniov, Ye.P. Dyban belong to famous scientists who worked at the Institute.

At present, the Institute employs about 400 people, including 3 Academicians of NAS Ukraine (A.A. Dolinsky, A.A. Khalatov, Yu.F. Snezhkin ), 6 Corresponding Members of NAS of Ukraine, 17 doctors and 93 candidates of sciences.

There are 12 scientific departments in the structure of the Institute.

The Institute has doctorate, postgraduate study and two Doctor and PhD Scientific councils for the defense of dissertations.

The Institute since 1979 publishes the international scientific and applied journal “Industrial heat engineering”.

The Institute is the organizer of several international scientific conferences. Among them: “Problems of Thermophysics and Heat and Power Engineering”, “Energy from Biomass”, “Problems of ecology and operation of energy facilities”.

The IET of NAS of Ukraine has a constantly exhibition of its own developments “Energy and Resource Saving”.

The Institute of Engineering Thermophysics of NAS works in the field of energy, performs work for the industry and agro-industrial sector. It cooperates with NJSC Naftogaz of Ukraine, PJSC “Kyivenergo”, State Enterprise GTRDS “Zorya”-“Mashproekt”, State Design Office “Yuzhnoye” by named M.K. Yangel and other organizations and enterprises.

Specialists of the Institute are members and experts of the committees, councils at ministries, departments and state administrations on issues of production, transportation and consumption of energy.