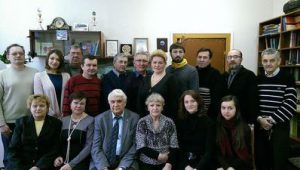 The Department of High-Temperature Thermogasdynamics (HTTGD) was transformed in 1986 from the Department of Dynamics of Thermal Processes, which was organized in 1964. Since 1983, the Division is headed by the academician of the National Academy of Sciences of the Ukraine, Doctor of Technical Sciences, Professor A.A. Khalatov. Since that time, the Department has begun to develop experimental and theoretical studies in the field of thermogasdynamics of flows in the fields of centrifugal forces and their applications in power machines, technological processes and apparatuses. Since 1986, this direction has become the main scientific direction of the Department, and for this reason it was renamed into the Department of High-Temperature Thermogasdynamics. In a short period, a modern experimental basis, equipped with an automation system of the experiment, with thermoanemometry has been created in the Department. For many years  the work in the field of mathematical simulation of non-stationary processes in transport and stationary power plants has been carried out in the Department.

Practically in all directions the staff of the Department has obtained basic fundamental results, has  made a serious contribution to the theory and practice of flows in the fields of centrifugal mass forces. The results obtained in the department had a serious impact on the design of structures in defense technology and the development of new thermal technological processes. Currently, the Department has a stable leading position on this problem both in the Ukraine and in the world;  published monographs, invitations to international and national conferences, received international grants and scientific awards, invitations to foreign universities, research centers and project organizations for lecturing and conducting seminars evidence this.

Since 1983, the Department is headed by Doctor of Technical Sciences, Professor, Academician of the National Academy of Sciences of the Ukraine A.A. Khalatov. He is a leading scientist in the field of thermogasdynamics of flows in the fields of centrifugal forces, cooling systems of gas turbine blades, new vortex technologies of aerothermodynamics, high-temperature thermophysics, and heat transfer enhancement. Khalatov A.A. is author and co-author of 29 monographs and books, over 750 scientific papers (more than 100 in English) and 230 patents of the Ukraine and Russia. He has prepared 36 candidates and 4 doctors of technical sciences. He was invited to work in the USA and UK.

The staff of the Department:

23 employees, including 1 doctor of sciences, academician of the National Academy of Sciences of the Ukraine, 11 Ph.D.

The main scientific direction of the department

Detailed directions of activities of the department

Description of ongoing and performed projects