History of the Laboratory

3 employees have the degree of Ph.D.

There is 1 graduate student in the laboratory.

The main activity of the laboratory 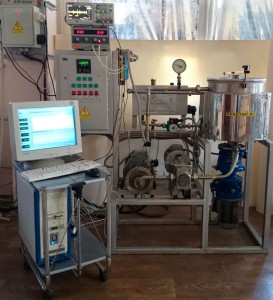 Theoretical and experimental studies of heat-mass exchange processes in thermal and hydrodynamic treatment of complex heterogeneous systems including ultra-dispersed are the main direction of the work. The development and implementation of new effective technologies and equipment are based on complex heat-mass exchange processes, such as heat transfer during heating and cooling, melting, dispersion, homogenizing, mixing and dilution, structuring, mass-transfer processes, molecular diffusion and others.

An effective method to control heat-mass exchange processes called discrete pulse input of energy (DPIE) method is used in many laboratory studies. The method allows to accumulate heat and potential energy in the working volume of the heterogeneous system and then to transform it into kinetic energy.

The detailed directions of the laboratory

The description of completed and ongoing projects

The nature of the DPIE influence on the structural and mechanical properties of heterogeneous dispersed systems was researched. The methods for producing stable emulsions from non-polar and weak polar liquids using DPIE effect were studied. The liquid fuels with biocomponents, such as oil and ethanol, with the content of ethanol in the mixture of 30% by weight were chosen as model medium examples.

The theoretical research of the three-dimensional structure of the flow (velocity fields, pressures, energy and temperature dissipation) in the proposed model of rotary-pulsation apparatus (disc-cylinder type) was carried out. The rotary-pulsation apparatus realizes complex of physical DPIE effects. The research results allowed to see the complete hydrodynamic picture of the fluid movement, and on the basis of these parameters of hydrodynamic and thermal flow disturbances to generalize the possible dispersion mechanisms of heterogeneous systems.

1.7.1.844 “Research of hydrodynamic and heat and mass transfer processes in micro- and nano-structured disperse media”

The cooling properties of meso- and nanofluids on the basis of vegetable oils produced by DPIE method were investigated for the first time. The different thermo-physical properties of the fluids depend not only on the composition of vegetable oils, but also on the nature, size and dispersed particles and production methods of cooling media.

DPIE processing method allowed to increase the cooling capacity of vegetable oils in 1,1 … 2,9 times at the high temperature range (600-850 ° C).

The qualitative difference of cooling fluids based on rapeseed and soybean oils was the lack of film boiling stage, which led to increase heat removal rate and uniformity of cooling of the sample at high temperature range (600-850 ° C).

The character of a contact interaction between the structural elements of the particles and between the nanostructures and the dispersion medium was taken into account in the research. The cooling rate in xerogel methylsilicic acid fluid with a predominance of phase nanostructure contacts significantly exceeded the intensity of cooling in the silica fluid with coagulation contacts between nanoparticles.

1.7.1.852 “Development of methods for intensification of hydration, hydrolysis and extraction based on using of Discrete-Pulse Input of Energy mechanisms”

The intensification of the extraction process has been implemented in the plant “Riga-1000” for the production of herbal medicines which was developed for Riga pharmaceutical factory. Furthermore, the method was used in the pilot thermal diffusion plant for BAS extraction with liquefied gases in Zhitomir Enterprise “Liktravy”.

1.7.1.860 “Theoretical and experimental researches of heat and mass transfer in technological processes using the Discrete-Pulse Input of Energy method. ”

The use of DPIE method allowed obtaining the stable mixture of hydrophilic and hydrophobic components, improving the quality of suppository medicinal forms (MF). Furthermore, the thermocontact local melting method based on the direct contact with the heating substance was used to prevent overheating.

The technology and the plant “Termobat-M” for melting structures for the production of soft medicinal forms was developed. The documents for validation of equipment in accordance with GMP requirements were prepared.

1.7.1.712 “Research of heat and mass transfer with Discrete-Pulse Input of Energy into heterogeneous systems for the nanotechnologies development and implementation”

The complex studies were carried out to determine the effect of physical and chemical effects on the functional properties of soft medicinal forms (SMF), including: sorption activity and the kinetic stability of the silicon and combined nanosystems. It is allowed to offer the technology to produce nanostructured multicomponent heterogeneous soft medicinal forms.

The basis of the development is the principles of the direct discrete effects of energy on the complex heterogeneous media, implemented in disk-cylinder type apparatus.

CFD-dimensional model of the flow in the apparatus was developed in co-operation with the Department of modeling of heat mass transfer processes in the energy objects and heat technologies (MHMTP).

The technical design of the new disc-cylinder apparatus for discrete-pulse input of energy was developed by the laboratory.

The dispersed systems which were researched:

The designed and manufactured disc-cylinder apparatus provides the DPIE method. The apparatus is used to obtain high dispersed liquid systems, which include the meso- and nanofluids. The experimental studies have shown that the cumulative influence of hydrodynamic, hydroacoustic and hydromechanical properties in heterogeneous environments was a promising method to produce superfine systems. The pressure pulsation oscillograms for different flow regimes of model environment in the disc-cylinder apparatus were received in the modernized stand for the research of hydrodynamic and hydroacoustic effects by DPIE method in heterogeneous environments.

The structure formation in “silicon dioxide – distilled water» nanofluids was researched with the help of numerical simulation and the obtained results were compared with the experimental sample of nanofluid prepared by DPIE method in the rotary-pulsating disc-cylindrical apparatus.

Shell and tube heat exchanger with discrete vortex turbulatos with a capacity of 350-400 kW was designed and manufactured. The heat transfer coefficients in 1.5-1.6 times were increased in the corrugated tubes compared with smooth tubes.

The processes of heat exchange technology for producing liquid biofuels for municipal and industrial power were worked out on the lab and stand equipment. Thermo physical parameters of the treatment processes during the production of liquid biofuels based on vegetable oils and alcohols were determined.

The thermo pulsating technology for producing liquid biofuels based on the heat exchange research and simulation of hydrodynamic processes in the input energy in heterogeneous systems was suggested.

The research of heat transfer processes for producing liquid biofuel mixtures using the principles of Discrete-Pulse Input of Energy was carried out in the laboratory and on stand equipment. Thermo physical parameters of the production processes of liquid biofuel blends were determined. The production modes of liquid motor and energy fuels with biocomponents were studied.

Calorific value of biofuels (bioethanol and biodiesel), and their mixtures was experimentally measured and compared with conventional fuels. The study results were generally summarized.

The innovative biofuel blends production technology with the principles of Discrete Pulse Input of Energy (DPIE) to accelerate the mass transfer and thermal processes was offered according to the research.

Technical documentation on the scientific and technical production “Station for production fuel mixtures СПБС-1000”, with a capacity of 1,000 l/h was developed. The DPIE method to intensify heat transfer processes of biofuel blends preparation is used in the equipment.

Contract #22 “The development of innovative technology and the installation of continuous action with the use of the reactor with discrete vortex turbulators for the production of liquid biofuels” (Program “Biological resources and the modern technology bio energy conversion” 2013-2017.).

The new experimental rotary-pulsation apparatus LDCD-750 for homogenization and dispersion of suspensions and emulsions, as well as to intensification of the physical and chemical processes during the production of liquid biofuels was designed and manufactured.

A new stand for the study of thermal technological processes for production liquid motor biofuels was created. The experimental regimes of stand equipment for the study of heat transfer processes for producing liquid biofuels were worked out. Experimental tests for determining the thermo-kinetic regularities of transesterification process of vegetable oils with methanol and alkaline catalysts were carried out.

The effect of different factors on the process kinetics (the effect of temperature, the materials and a catalyst, the effect of the intensity of the hydrodynamic processing of the reaction mixture) was determined experimentally.

Contract № 04-08-12 «The research of heat and mass transfer in multicomponent systems for the development of a new generation sorption heat converters.”

The analytical and experimental research of heat and mass transfer in sorption converters was carried out. The experimental models of adsorbers using new sorption materials created in SB RAS were worked out in the Lab.

The parameters of working cycles of sorption thermo transformers and the data for the synthesis of energy-efficient adsorbents for sorption heat converters were determined based on the analysis of efficiency of energy resources used in the industry and thermal heat capacity of the various installations that generate heat.

The obtained data are the basis for the development of a new generation adsorption heat inverter, which creation will contribute to more efficient use of energy resources and attract the secondary and renewable energy sources in the energy section.

The existing models of absorption heat converters (AHC) were examined and the concept and design of a new generation adsorption unit was developed. The experimental model of AHC was tested and the actual energy performance during the adsorption cycle was examined.

The recommendations for the use of AHC in industry and agriculture were given, and the data for AHC calculation and design were formulated. The technological schemes of AHC implementation to the heat and cold systems were presented as a result.

The laboratory is open to all forms of cooperation wit for developing and manufacture scientific and technical products is created as a result of the research. The scientific and technical products are integrated in the pharmaceutical and processing enterprises in Ukraine and abroad. Samples of the developed equipment are presented on the site: http//www.htplab.kiev.ua.

We are interested in joint development and implementation of projects in the following areas:

– “Development of accelerated heat technology and equipment for the production of soft dosage forms in the pharmaceutical industry and pharmacies.”

– “Creation of resource-saving technology and a range of hygrothermal equipment for the dehydration of thermolabile substances in pharmacy and processing industry.”

– “Research of the processes of energy input in the system “solid-liquid”.

Scientific, technical and technological developments are carried out for the production of new forms and types of products of various industries:

Major publications of the lab