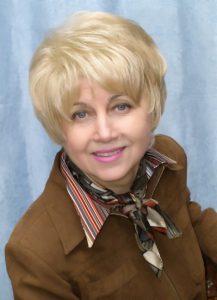 Department Head of municipal power engineering, corresponding member of NAS of Ukraine, Doctor of Technical Sciences, Professor, Honoured Scientist of Ukraine, laureate of State Prize of Ukraine in the field of science and technology.

In 1972, she graduated with honours from the Kiev Polytechnic Institute (now – NTU “KPI”), and was sent to the Institute of Engineering Thermophysics of NASU, which has gone from being an engineer to the head of the department. In 1975 he enrolled in graduate school, which he successfully graduated in 1978. Thesis on “Investigation of temperature conditions in the presence of moving bodies concentrated sources of energy” defended in 1980. Doctoral thesis on “Investigation of heat transfer processes in the implementation of advanced resource-saving technologies for processing materials” – in 1994. From 1995 to 2000, he was the scientific secretary of Engineering Thermophysics of NASU Institute. Since 1995 – Head of the department of municipal power engineering of ITTF NASU. In 1998, N. Fialko was awarded the title of Honoured Worker of Science and Technology. In 2000 – elected a corresponding member of National Academy of Sciences of Ukraine. In 2005 she was awarded the academic title of professor. In 2012 she was elected a full member of the Ukrainian Academy of Construction.

Fialko – the leading scientist of Ukraine in the field of Thermal Physics and thermal power, in particular, in the modeling of thermal processes in the energy equipment, the creation of new and effective energy systems, the development of advanced energy-saving technologies. She made a significant contribution to the development of the theory of multi-dimensional modeling of complex nonlinear processes of heat transfer and material. Main scientific works N. Fialko dedicated to the development of thermal energy by improving the efficiency of equipment, reconstruction and modernization of municipal power system, the establishment and introduction of modern highly effective methods of trouble-free operation of nuclear power plants and others. Specific attention to the strategic development of the fuel and energy complex of Ukraine. Designed with its direct participation methods, technologies and equipment widely implemented in enterprises of Ukraine and Russia, in particular, at “Uralmash” ON “ATOMMASH” ON “Izhora Works”, Burshtyn, Ladyzhynskaya, Tripoli and Zmiev TPP, ON “Pavlogradugol “JSC” Farmak “, JSC” Vetropack Gostomel plant “, JSC” Kostopil glassware factory “in the branch” Zhilteploenergo Kyivenergo “and others. One of the areas of scientific activity N. Fialko in recent years is the development of thermo-physical foundations of polymeric micro- and nano-composite materials for the elements of power equipment.

NM Fialko prepared 9 candidates and 4 doctors of sciences. She is the author of over 580 scientific works, including 11 monographs, 3 textbooks and more than 20 patents for inventions. Main monograph “Thermal physics of energy-saving technologies for energy” (2000), “Mathematical modeling of energy-saving technologies for the power industry” (2001), “Fundamentals of the theory of localization” (2003), “Thermal Physics of formation of amorphous and nanocrystalline thermal coatings” (2005), “Energozberezhennya in budіvnitstvі “(2008),” Thermophysics safety of nuclear power plants “(2010),” Thermal Physics reactor accident “(2012),” Thermophysics damaged reactor plants “(2013),” Heat regimes of the premises at ecologicaly clean  heat accumulation floor electric heating “(2014), “Thermophysics of reliability of active zones” (2015) and others.

For long-term conscientious work, considerable personal contribution to the scientific and technical support for the development of Ukraine’s energy, professionalism, NM Fialko Order “For labor achievements” of the International Academic Rating of popularity “Golden Fortune” (2009, 2012), awarded the prize Presidents of the Academies of Sciences of Ukraine, Belarus and Moldova (2010) was awarded the title of “Honorary Energy of Ukraine” (2007), awarded, became the winner State Prize of Ukraine in science and technology (2014), marked a large silver medal for the best publication in the field of building science ” Heat regimes of the premises at ecologically clean heat accumulation floor electric heating ” (2014) and others.

N.Fialko actively participates in the work of scientific and public organizations. She – Scientific Secretary of the National Committee of Ukraine for Heat and Mass Transfer, a member of the central board of the Scientific and Technical Society of Power and Electrical Engineers of Ukraine, member of the Expert Council of the MES of Ukraine, member of the editorial boards of professional publications: “Industrial heating engineering”, “Window Technologies”, “Renewable Energy” “Modern science,” “Energy: the economy, technology, ecology”, etc., a member of two specialized academic councils.