Problem. Currently working ventilation scheme in fires at subway stations are designed simplified empirical methods. Tests on natural objects are not carried out for obvious reasons. In such emergency situations the absence of optimal schemes of evacuation and fire ventilation modes can lead to loss of lifes.

Proposition solutions. With the help of the developed 3D CFD-model analysis and predicting air flow and smoke in case of fire in the Kyiv metropolitan. For this was created as model stations “Polytechnic Institute” and “Shulyavka” to calculate heat and mass transfer processes and movements of ventilation air flow (clean and smoke) and no fires at stations with and without the presence of trains in tunnels (Fig. 1). 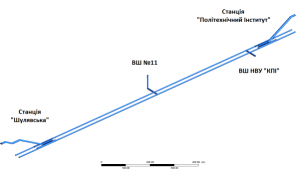 Figure 2 – Computer model of train traffic in tunnels between stations “Shulyavska” and “Polytechnic Institute” on the left – the start from the train station; Right – a counter-movement of trains in the tunnel.

As the testing of possibilities of application of these models was set fire model, what happened to “Osokorki” station in 2013 taking into account the neighboring stations “Slavutich” and “Poznyaki” (Fig. 3) 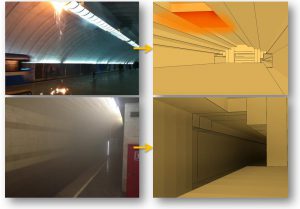 The developed computer models allow us to calculate and choose the best activities for smoke protection of underground facilities and other emergency situations, both in subway stations and tunnels.