Problem. Due to the construction of the New Safe Confinement (NSC), the release of radioactive aerosols (RA) into the environment will decrease, but they will dissipate into the internal airspace (the main volume) of the NSC itself, which will employ the personnel.

Proposal to solve the problem. An improved system for monitoring the propagation of radiation aerosols inside the SO and NSC by introducing a three-dimensional continuous CFD-model of the thermogasdynamic, wet and radiation state of the NSC and SO will allow not only to measure and analyze the parameters of the internal environment, but also to make predictions of the distribution of the radiation fields of the SO and NSC in normal, and especially in the extreme conditions of operation of the NSC. This is especially important in freelance and emergency scenarios of the occurrence of radiation emissions into the airspace of the NSC when dismantling the SO and their location and duration of harmful influence on working personnel during work within the NSC.

The system of monitoring the state of the material consists of two parts: software and hardware. For its operation, in addition to these two parts, only the exchange of data via the Internet between the NSC and monitoring software, which may be anywhere, is required. 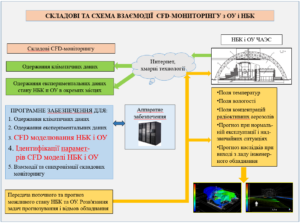 Component parts of the CFD monitoring system are computer programs developed for obtaining input (climatic) data near the NSC and the Chornobyl NPP, current measurements of the NSC state parameters, as well as program management between individual components of the monitoring. At present, the analysis of the thermogasdynamic and radiation state of the SO and the NSC during the period of NSC introduction into operation and prediction of the SO and NSC state at the beginning of the NSC operation period is carried out.