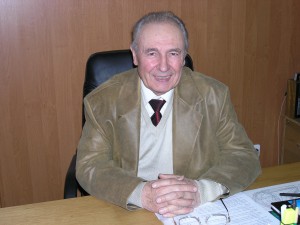 Anatoliy Dolinsky was born in July 21, 1931 in the village Orlyanka of Vasylkiv district of Zaporozhye region. He was graduated in 1954 Heat Power Department of Kyiv Polytechnic Institute.

A.A. Dolinsky has kept and creatively developed the traditional schools of the Institute.

On the initiative of Anatoly A. Dolinsky exhibition of development of institute was created and acted over 20 years.

Anatoliy Dolinsky made significant contributions to the theory and practice of spray drying. He proposed a new method for intensification of heat and mass transfer in disperse systems, proved decisive role of internal transport processes in the dehydration of thermolabile solutions, also he proposed calculation method for spray dryers taking into account the internal transfer processes.

A.A. Dolinsky carried out energy research which allowed identifying the most urgent areas of energy efficiency, particularly in communal energy. The basis of system modeling ecological processes of heating are developed.

A.A. Dolinsky takes an active participation in the Interagency Working Group on developing the National Heating Strategy. Under his leadership number of projects of state regulations, documents and programs which define the scientific ideology and policies of communal heat power and heat supply systems are developed

Over the years, AA Dolinsky is the head editor of the scientific journal “Industrial Heat Engineering”.

The results of A.A. Dolinsky research and their practical applications are in over 600 scientific publications, including 20 books and over 120 patents.

For outstanding personal achievements in the development of national science, creation of national scientific schools, strengthening scientific and technical potential of Ukraine A.A. Dolinsky awarded the Order: Friendship of Peoples (1986), for Merit III and II degree (2002, 2011), for Labor achievements IV degree (2000). A.A. Dolinsky awarded the title “Honored Worker of Science of Ukraine” (1991), “Honored Power Engineer of Ukraine” (2006), “Honored Worker of Housing and Communal Services of Ukraine” II degree (2007). He was awarded the insignia “For scientific achievements” of the NAS of Ukraine, “Badge of Honor” of National Agency of Ukraine for Efficient use of energy, “Gold Star Mercury” of Commerce and Industry Chamber of Ukraine, the medal “Honor” of mayor of Kyiv, the medal “Honored Power Engineer of the Commonwealth of Independent States” CIS Electricity Council. He is the winner of the All-Ukrainian competition “Leader of fuel and energy complex – 2001” in nomination “Scientist”.